The joint Turco-Italian Archaeological Expedition has been active in the region of Gaziantep since 2003 under the direction of Nicolò Marchetti of Bologna University. Two archaeological and environmental parks were completed and opened to the public in the province of Islahiye, at Tilmen Höyük (in 2007) and at Taşlı Geçit Höyük (in 2010).

A new project at Karkemish was then started by the Universities of Bologna, Gaziantep and Istanbul in 2011 after its approval by the Turkish Council of Ministers: the first ten campaigns have taken place between 2011 and 2021 with Nicolò Marchetti as director, Hasan Peker as deputy director and Mustafa Özakça as scientific advisor. This was a development which the archaeological community and the interested public had been waiting for almost a century, after the site could no more be explored and visited since becoming a military outpost in 1920. The joint project has an integrated approach to research, conservation and presentation: it foresees the extensive investigation of the urban layout of the Bronze, Iron and Roman periods town and at the same time the conservation of the remains, also in view of touristic enhancement.

Gaziantep and his heritage

The region of Gaziantep is situated, geographically, between Anatolia, Syria and Mesopotamia. This key position is reflected in its importance through the ages, which until recently was however not properly reflected in its touristic potential. Ongoing excavations have now given to the region an outstanding new potential which is now beginning to be acknowledged internationally. Karkemish is a world-famous site and has an extraordinary historical importance: its significance rivals with that of Khattusa, Ebla, Nineveh, Babylon and Ur. The reopening of research at Karkemish and of tourism at the site represents a great asset for writing new pages in the history of the Ancient Near East and for the enhancement of cultural heritage in the region of Gaziantep. 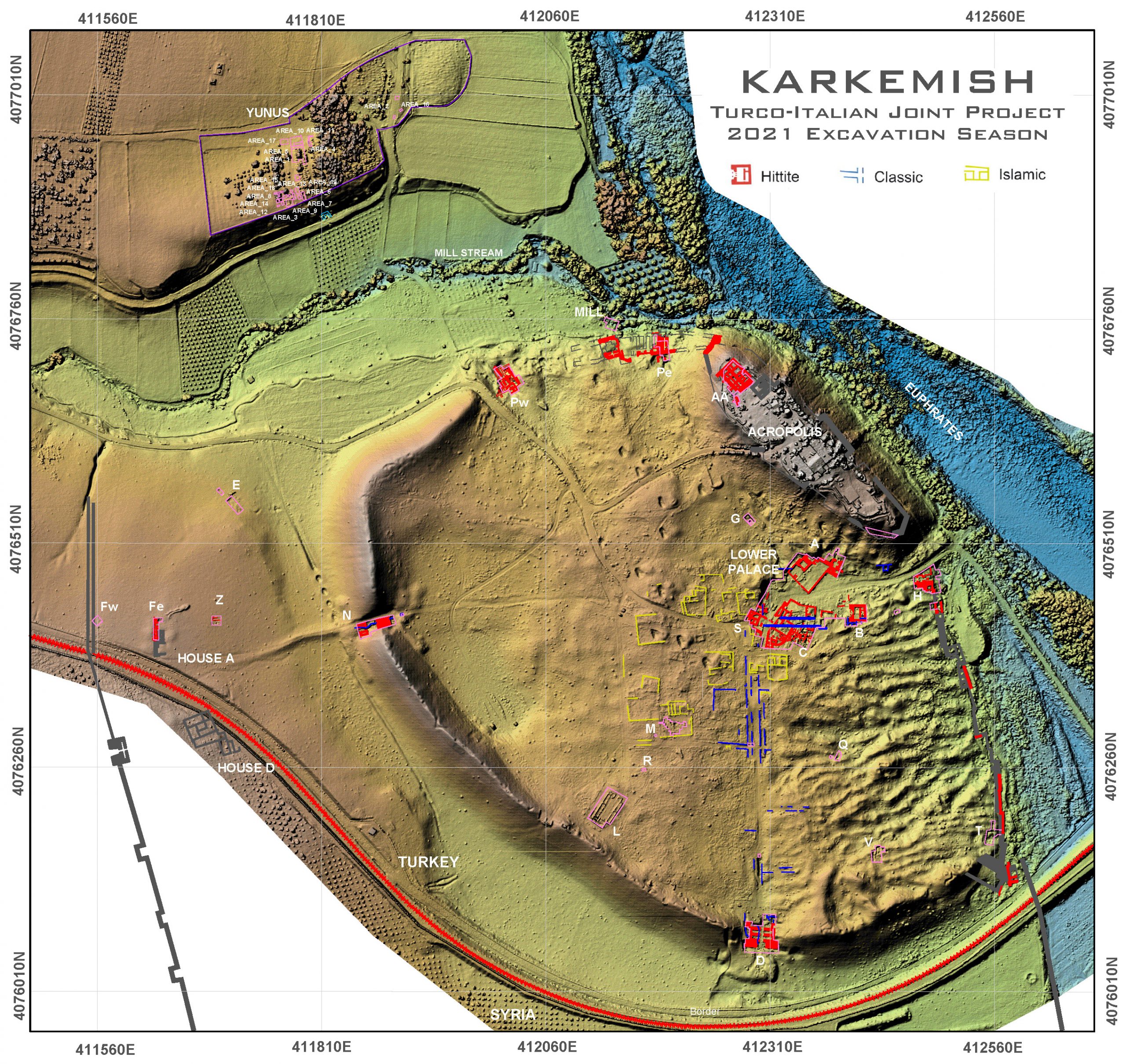 Karkemish is one of the most important capital cities in the ancient Near East. Already attested in the Ebla texts (c. 2300 BC), Karkemish became the seat of the Hittite viceroy and then of a local dynasty which flourished until the Assyrian conquest in 717 BC and the Babylonian destruction in 605 BC.

Stone-built monuments lavishly decorated with sculptures, Luwian hieroglyphic inscriptions and monumental buildings surrounded by more than 20m-high city walls attest to the wealth of the town. In Hellenistic, Roman and Byzantine times, the site was a provincial city (impressive surface remains date from these later periods). First excavated between 1911 and 1920 by a British Museum expedition led by C.L. Woolley and T.E. Lawrence of Arabia (their excavation house can still be visited at the site), since 2011 Karkemish has been newly explored by a joint Turco-Italian Archaeological Expedition.

After the identification by George Smith of Jerablus with ancient Karkemish in 1876, between 1878 and 1881 the British consul in Aleppo P. Henderson carried out some soundings at the site and shipped some sculptures to the British Museum in London. This same museum organized at the site large scale excavations between 1911 and 1914 and again in 1920 with the archaeologists D.G. Hogarth, T.E. Lawrence, R. Campbell-Thompson, P.L.O. Guy and C.L. Woolley (director). The ruins of their Expedition House – built by Lawrence (of Arabia) in the first campaign – are still well visible in the inner town and many pictures document their daily life, with Lawrence acting also as photographer of the expedition, before serving as a military agent after the outbreak of the 1st World War. The results of these campaigns revealed features of the Iron Age town: a large ceremonial area (the “Lower Palace”) at the foot of the acropolis, from which the famous reliefs exposed in the Anatolian Civilizations Museum come; the city gates and its impressive walling; some houses in the outer town; and a very impressive palace on the acropolis, which was left mostly unexcavated due to the sudden interruption of the project when the French occupying forces were forced to retreat at the victorious arrival of Turkish troops in the Autumn of 1920.

The border was established along the railway cutting the site: the most important part of the ancient town remained in Turkey (55 hectares), whereas part of the outer town is now in Syria (35 hectares). After the border was demarcated again in 1956, the area came to be mined and only in 2011 demining was completed.

Archaeology has revealed that the acropolis has been inhabited at least from the 5th millennium BC onwards. Though significant, the site seems not to have been of special importance until 2300 BC, when the ancient city of Karkemish is quoted in the cuneiform tablets of the Ebla archives in northern Syria. The name Karkemish means “Quay of (the god) Kamis”, a deity popular at that time in northern Syria. It is however with the Middle Bronze Age, beginning around 2000 BC that the site takes its leading role: to this period date back the expansion in the lower town and its walling through the enormous earthern ramparts, which remained a characteristic feature of the urban landscape until the end of its history. Around 1800 BC, king Aplahanda of Karkemish was with Shamsiaddu and Hammurapi one of the mightiest of his time and he is documented as far north as Acemhoyuk. With the hittite conquest of the site around 1350 BC, Karkemish became the seat of the hittite viceroy, controlling the whole Syrian region. When the Hittite empire fell around 1195 BC, Karkemish became one of the most powerful independent kingdoms of the region and competed with our polities, doubling its extension (reaching 90 hectares) with the occupation of the walled outer town. In 717 BC Sargon II of Assyria destroyed the city and established there an Assyrian garrison, which lasted until 604 BC when it was in its turn destroyed by Nebuchadnezzar. The town continued to be inhabited in Hellenistic and Roman times, to which date the extraordinarily well legible city plan on the surface of the inner town (visible also in satellite imagery). At that time it was however called Europos, a toponym which continued to be mentioned in Byzantine sources, but then during the Middle Ages only the Acropolis was inhabited, before its final abandonment until the establishing of a Turkish military outpost after 1920.